Blasting and explosives specialist BME has entered the final year of its five-year strategy in which it aims to leverage its strong southern African organisation’s business processes and manufacturing capabilities to better service its expanded African and international mining market.

Well on track in meeting the objectives it has set out to achieve over the past four years, MD JOSEPH KEENAN is confident that the company has built a strong southern African base capable of better competing in a digitally evolving mining industry with its enhanced technology and service offering, writes CHANTELLE KOTZE.

BME’s five-year reorganisation, restructuring and recapitalisation strategy has focused on creating a diverse, fit-for-purpose and scalable company capable of meeting both market demands but also withstanding changes in any one of the markets in which it operates.

This, Keenan believes, will create long-term sustainability for BME, whose business model remains firmly based on delivering value to its customers by helping the mining sector improve its productivity and add value to operations while delivering cost effective technologies and services.

A strong focus of BME has been on expanding its geographic footprint and had early in the strategy already begun to identify where mining companies were spending their exploration capital and which regions offered potential future interest.

This exercise gave BME a good idea of which regions it should focus its global expansion on to better support the mining industry.

Read: Business strategy delivers on all fronts for BME

Once these markets were identified, the company geographically diversified its management teams so that the company’s regional managers are operating in BME’s identified growth markets and can therefore better tailor its technology and service offerings towards these growth markets in which BME aspires to operate in.

Since identifying these global growth regions, BME has made significant progress in establishing itself in these regions.

In the Australia-Asia region, BME completed the acquisition in 2018 of Australia-based Advanced Initiating Systems – a company that BME was instrumental in establishing. Rebranded to BME Australia, BME will use this as a base to expand its technologies and service offering in Australia.

Meanwhile, on the African continent, BME continues to strengthen its presence in both central and west Africa – where it has already created two hubs, one in Bamako, Mali to serve the west African region and one in Zambia, able to serve the central Africa region.

In central Africa, BME has opened a new office in Lusaka and a storage facility and distribution centre in Solwezi, Zambia to better service the central African region, while in west Africa BME has established eight emulsion plants in the region.

In the Americas region, BME shipped its first orders of AXXIS™ electronic detonators to Colombia in 2016, and expanded sales into Peru and Chile throughout 2017 and 2018.

The company also opened an office in Denver, Colorado in 2018, while in Canada, the company entered into a joint venture (JV) with Consbec. The JV, called BME Mining Canada Inc., is a manufacturing and service company for the surface and underground mining market that will create opportunity for BME’s growth and expansion in the region.

Similarly to the Canadian JV, it is BME’s preference to operate with local business partners in new markets and is looking to enter similar strategic partnerships in its identified growth regions, says Keenan, with the aim of fostering more holistic operations and opportunities for both BME and the local business partner.

In addition to entering new global markets, BME has also invested heavily in the “infrastructure” of the company, as Keenan puts it, which entailed establishing an enhanced company structure, both with improved business systems and processes to better manage its global operations, as well as new manufacturing and automation technology at its manufacturing facilities.

Having achieved several milestones in realising its strategy, BME can confidently say that it has laid a solid foundation for future success – from which the company has already started reaping strong reward and from which it will continue to benefit from as the strategy draws to a close this year.

“The final year of the strategy hinges on leveraging from the foundations we have laid over the past four years and begin to drive real value from the work we have done in our growth regions while continuing to innovate and invest in assets for the continued growth of the company,” says Keenan.

BME understands the need to be innovative in its approach and thinking around technology if it wants to be a competitive player in the digitally evolving mining landscape, says Keenan, noting that this is something that BME has successfully showcased in its range of AXXIS electronic detonation systems, which has undergone constant redevelopment.

BME has been working on its next generation AXXIS system – AXXISTitanium – which provides the user with additional features and benefits to the existing range of AXXIS electronic detonators. AXXIS Titanium, which will be available to the market this year, is also more user friendly, robust and safer than earlier models.

“While there are existing wireless detonation systems on the market, our aim is to improve the ease of use for the operator while also delivering a turnkey range of detonation products in-house for our customers to choose from,” says Keenan.

Climate-proofing mining operations in a era of climate change

The apocalypse is coming so line your pockets! 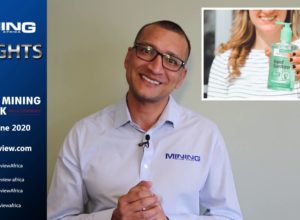